First Stop on the Trans-Siberian: Moscow

Moscow – the vast cosmopolitan metropolis that is the pulsating heart of Russia. We arrived here from Paris on the Paris-Moscow express on our Trans-Siberian adventure and Moscow is our first pit stop, we spent 2 days exploring the city and enjoying its architecture.

You can’t really say you’ve been to Russia until you’ve walked the streets of its historical centre where so many key events have played out that helped shape the world in the 20th century. 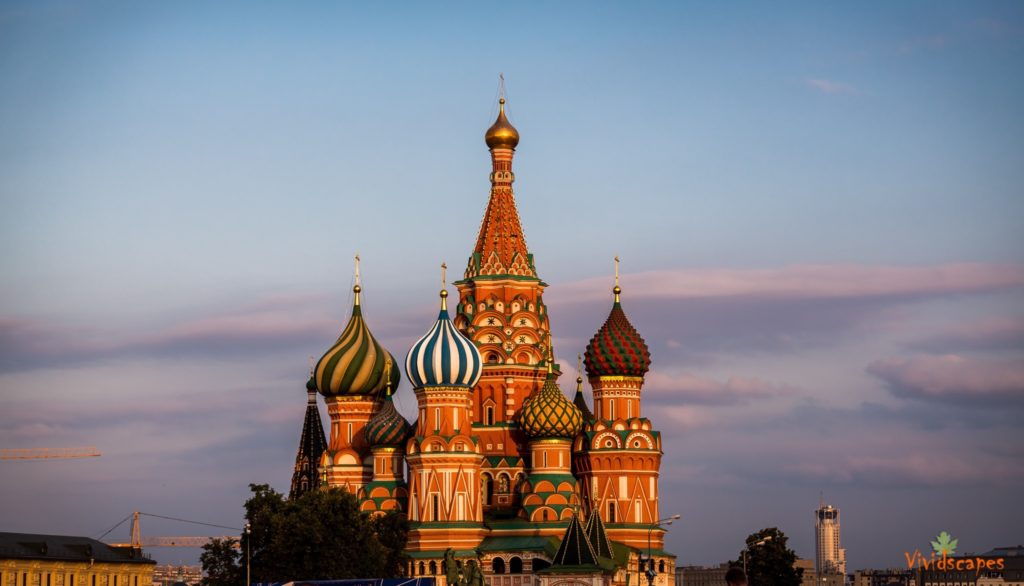 Beautiful colours in Red Square, a lively and buzzing place.

A place of boundless energy, Moscow is continuously changing, yet it feels uncompromisingly Russian, its has a fantastic mix of historic sites to active nightlife and glitz, 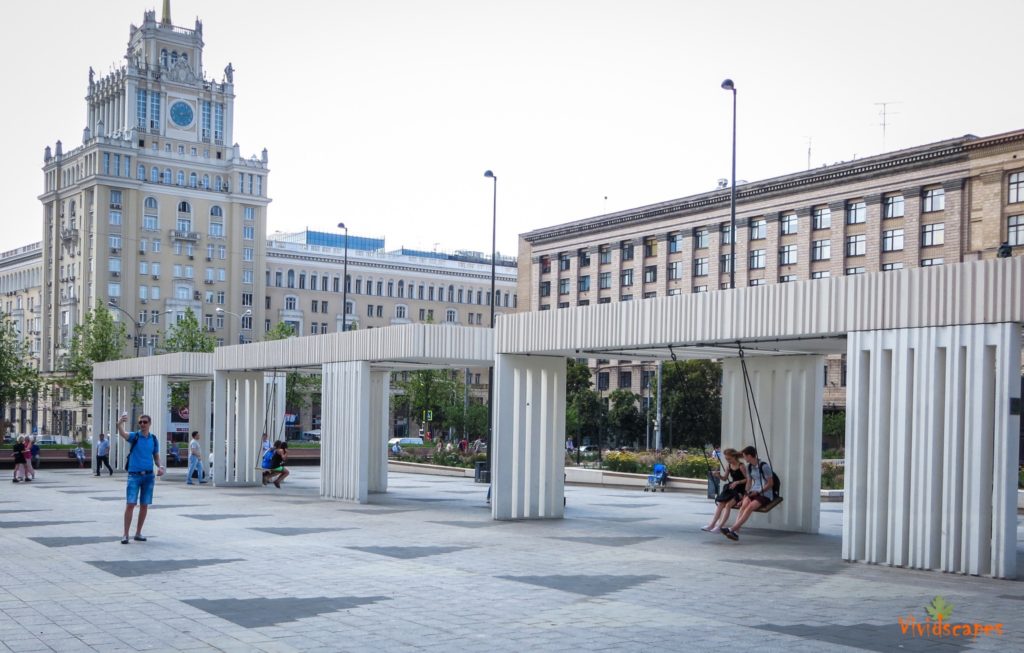 A pretty nice way to stay cool in summer is on a swing…. every city should have one….

a few days in Moscow is best recommended and read on to find a few interesting things we did while in Moscow.

There are bicycle tours available which would be the best way to visit all of the major attractions, we were not able to do the bike tour due to the weather, but the guys at Moscow bike tours were fantastic with the communication and regular updates.

You are bound to feel a real sense of occasion when you first set foot on this grand cobbled square, the heart of the city, featuring the most Russian and the most recognisable of architectural landmarks – St Basil’s Cathedral. 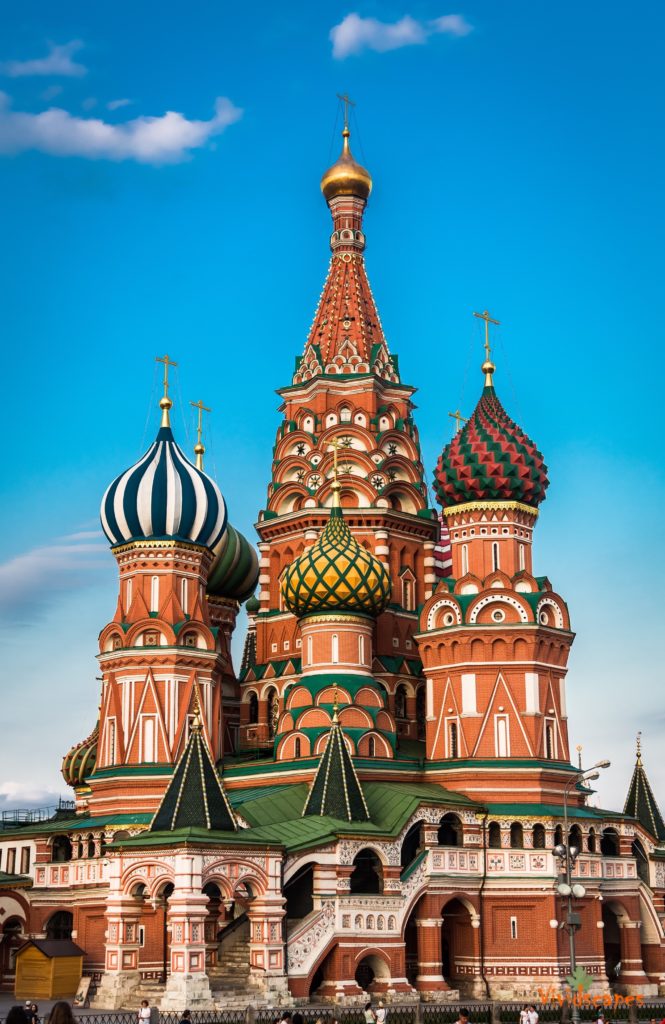 The Square extends across the area beside the north-eastern wall of the Kremlin, the name has nothing to do with Communism or the colour ‘red’, in old Russian, ‘krasny’ meant beautiful and it really is beautiful so much so that it makes you stop in your tracks the first time you see it, you are literally walking on history. 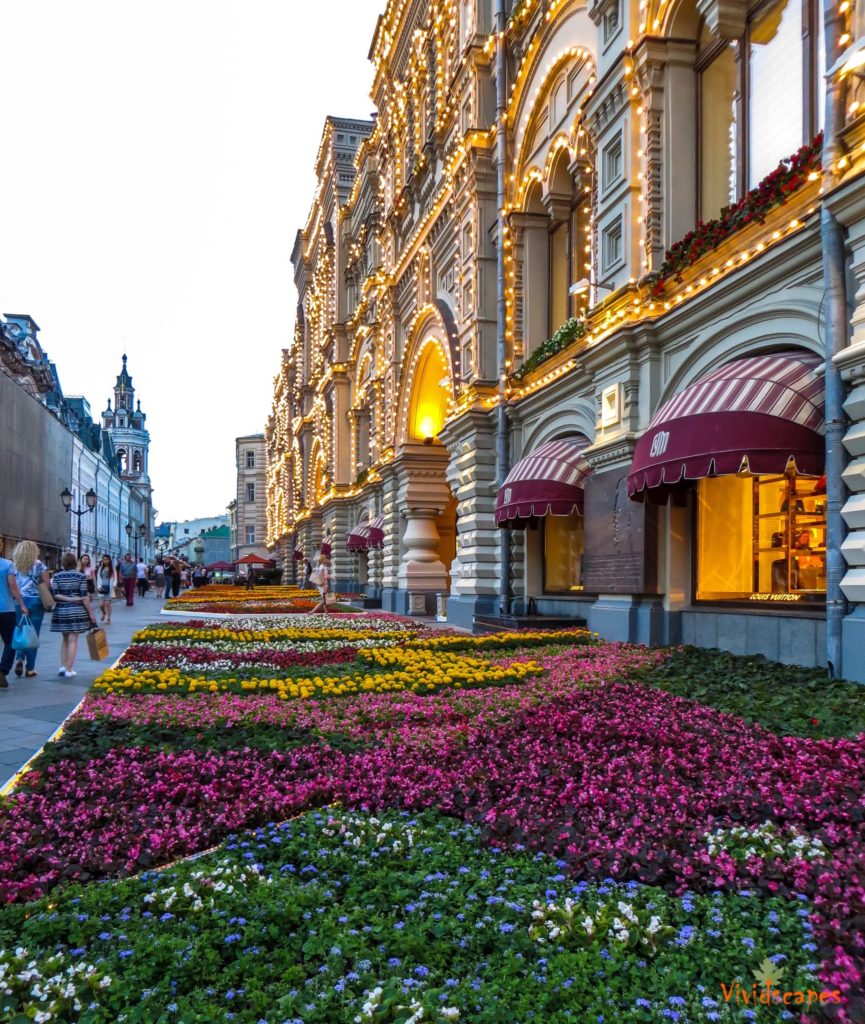 Streets around the Kremlin are filled with beautifully laid out flower beds.

Moscow metro system is a vast network of underground tunnels and stations, during the second world war most of these were built as underground bunkers and secret escapes routes for the soldiers. These enormous hideouts are now beautifully decorated metro stations that are an attraction in itself. 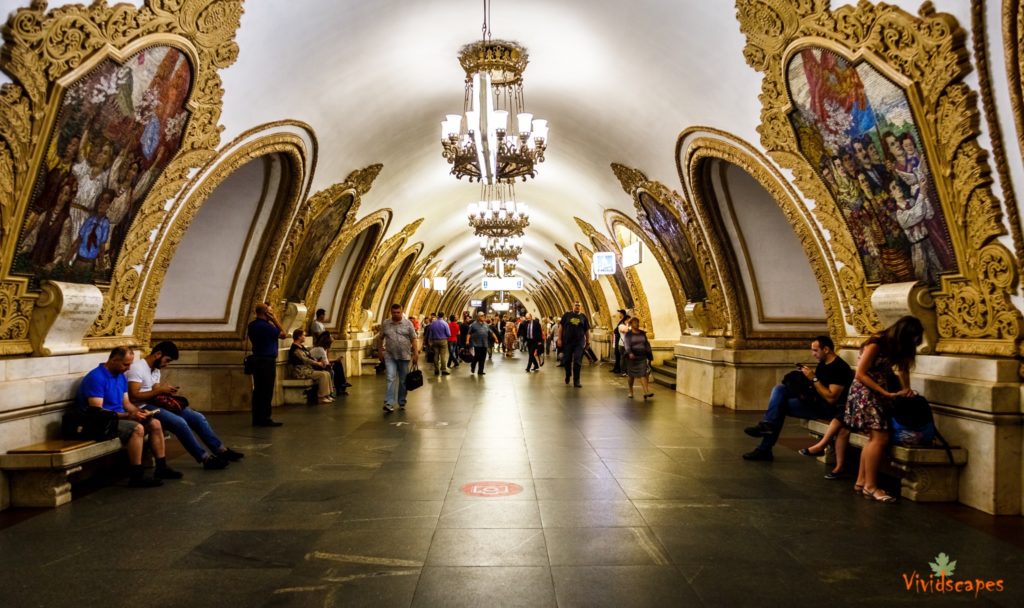 Each station is built in a completely different style and painted in historic scenary. 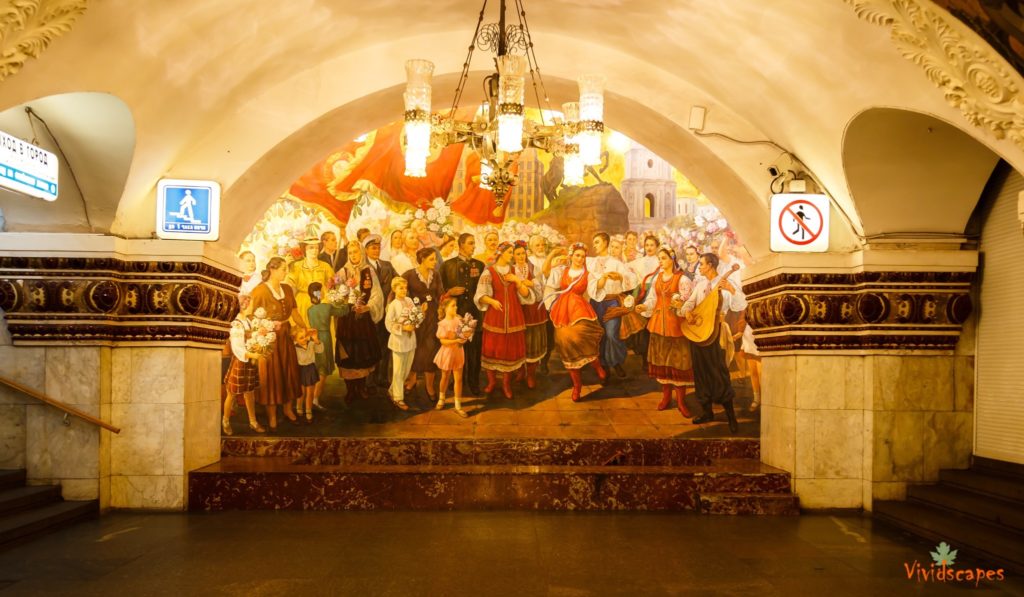 Historic scenes adorn the walls of the Metro stations

The best way to visit the stations is to get a day pass, get on the circular line and hop on hop off stations enroute. 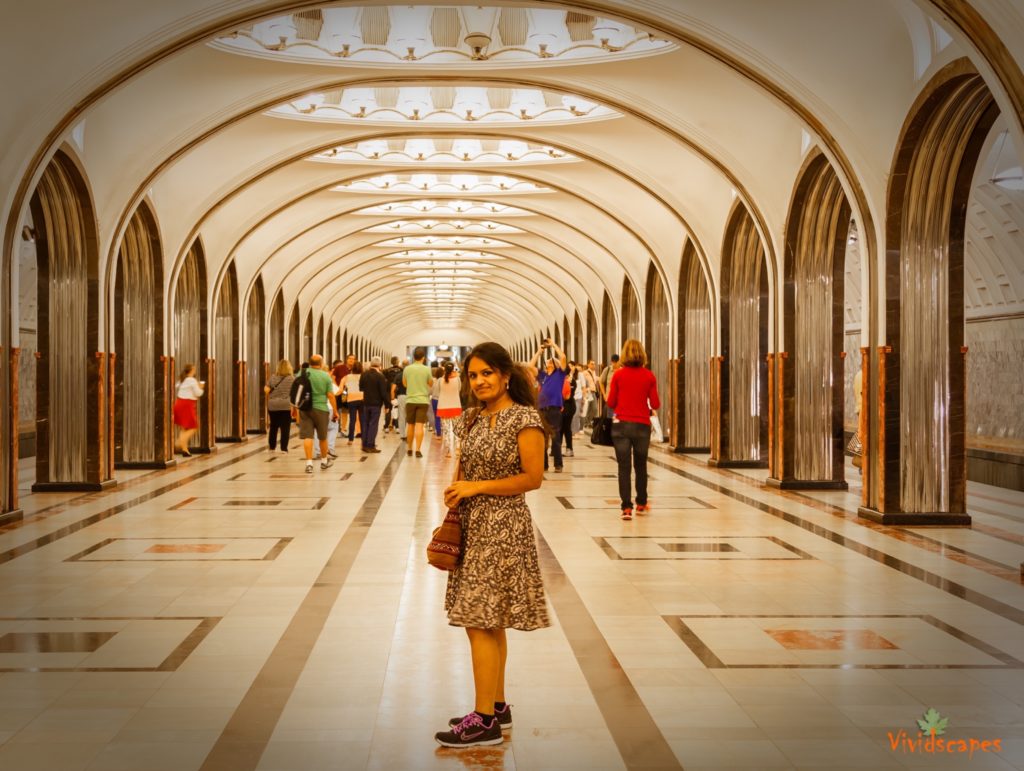 Russia and Vodka might sound synonymous, and its so famous in Vodka that it has a very long history and even has a museum to showcase the early roots of the drink and the distillation process, similar to the violent history of Russia, Vodka has also seen its share of bans and highs among the Russian tzars and the locals alike.

Russians have come up with 365 reasons to drink, a drink a day….!

More than 3000 varieties of Vodka on display… 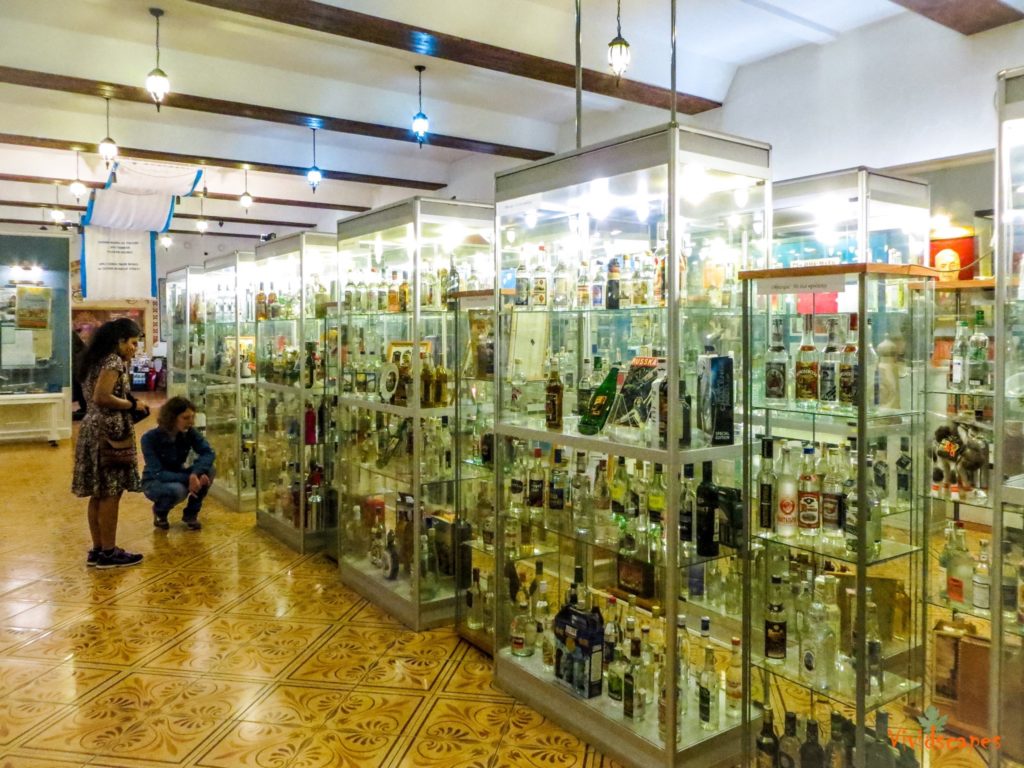 Next to the vodka museum is also a beautiful wooden church in Russian style, which sees a lot of weddings. 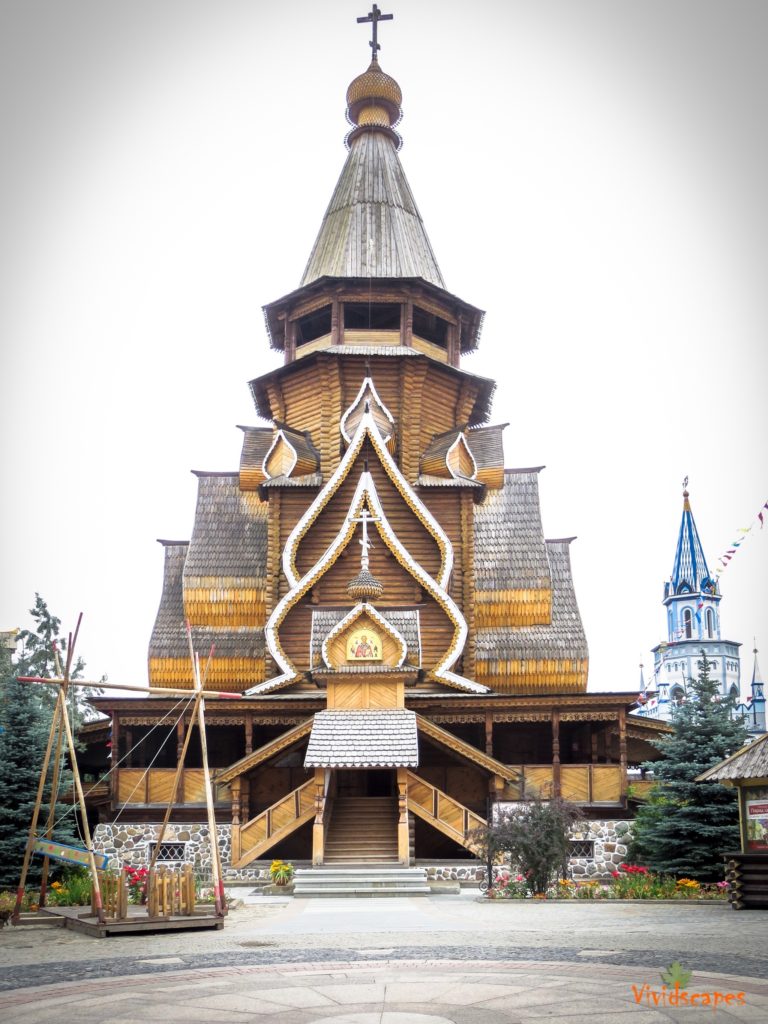 Weddings are a common occurrence here. 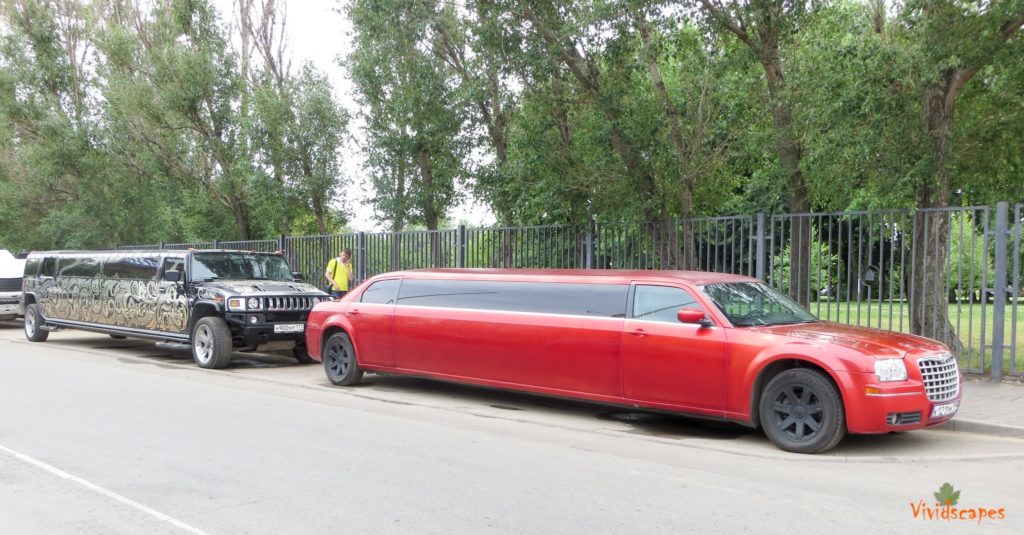 A Russian wedding procession with Limousines at the wait 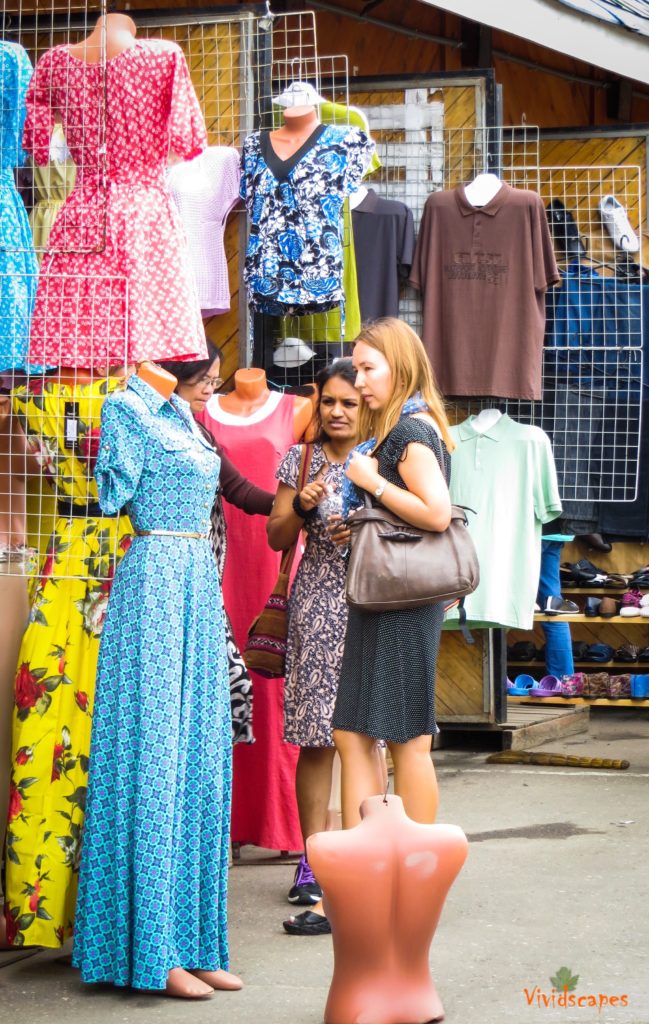 Suni on a shopping spree with our guide..

You might think the very name Russia might make you think its a meat eaters world out there and Vegetarian is an alien word, that’s what our friends made us believe and questioned us, Russia and Vegetarian… never…., but how wrong could we be, we found loads of Veg food joints with the help of the Happycow app and we couldn’t be any happier.

We tried 2 cafes and both had tasty food and fantastic service. 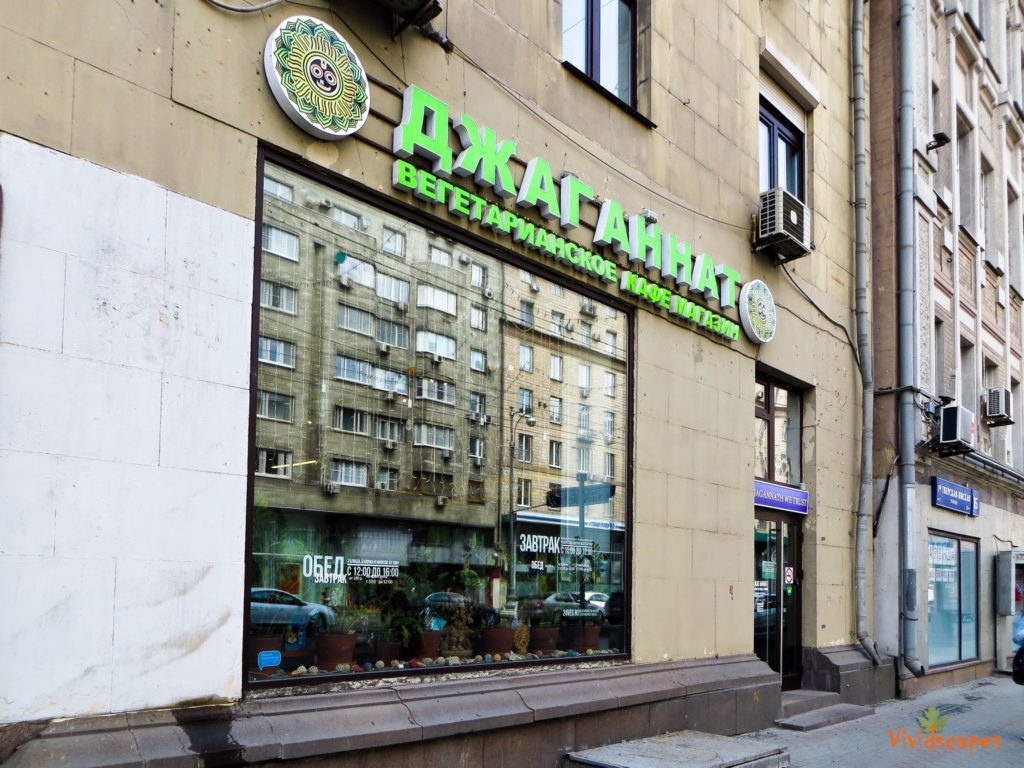 Run by the Jagannath temple trust, Puri, India, its veggie cafe, restaurant, and health food shop 10 minutes from Red Square, near metro station Kuznetsky Most and Lubyanka. Food is mostly vegan and are labeled in Russian. Limited English spoken. Pay for food by weight buffet style set up. 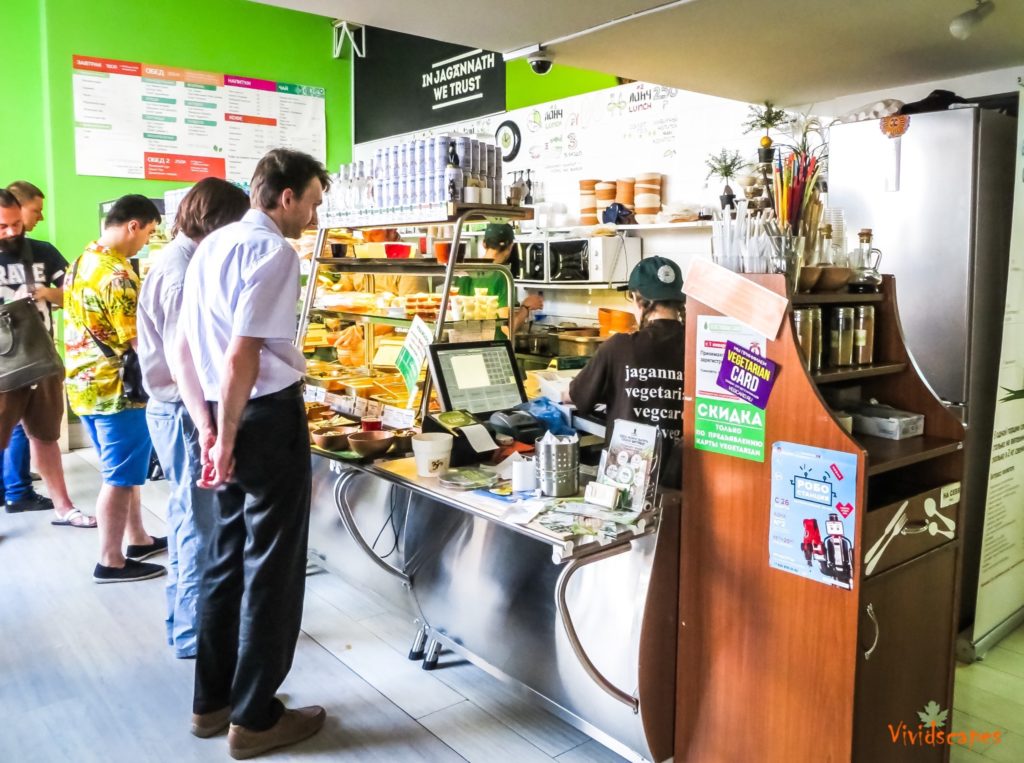 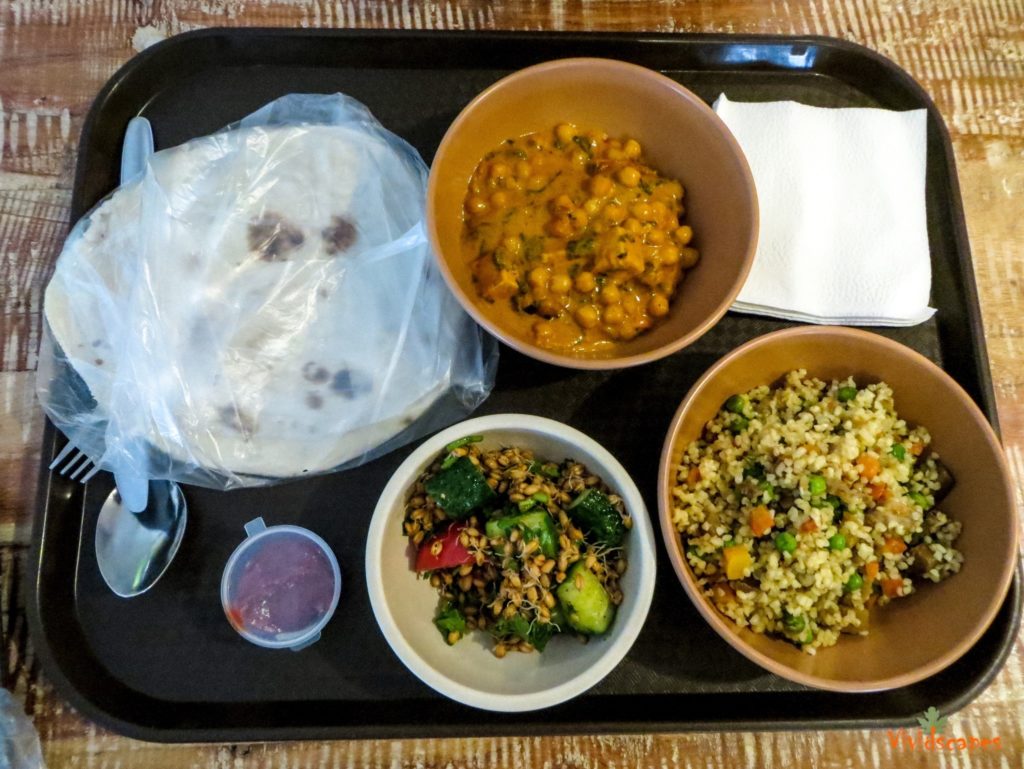 Tastes as good as the looks 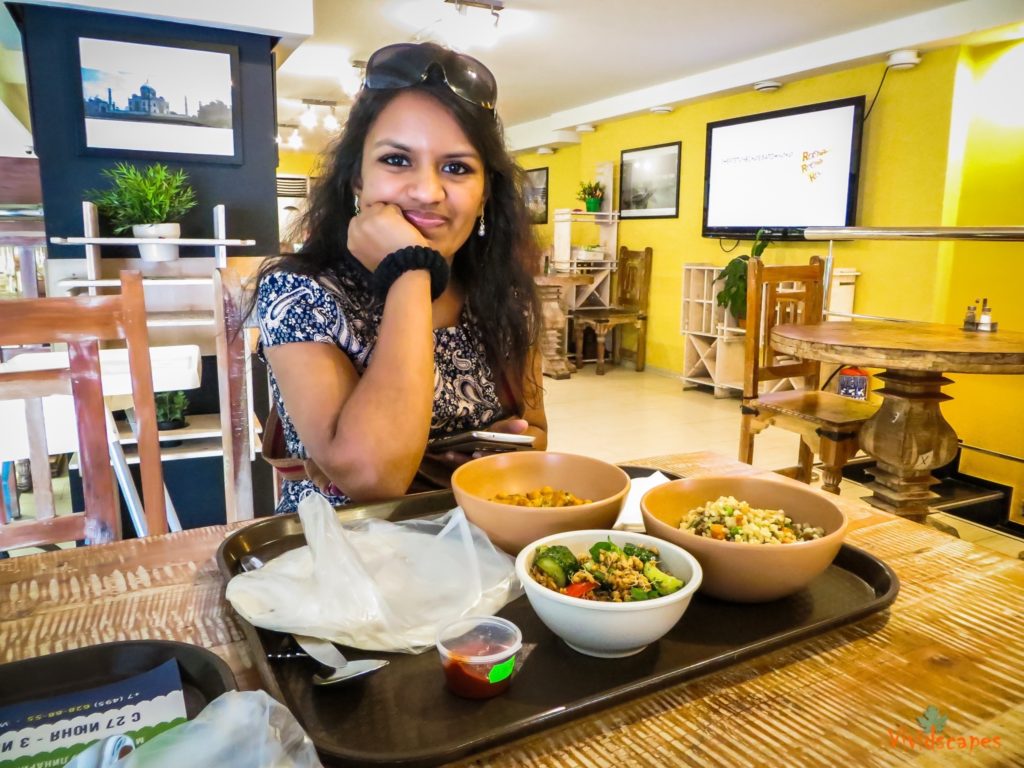 Someone is so elate seeing the veg options on offer… 🙂 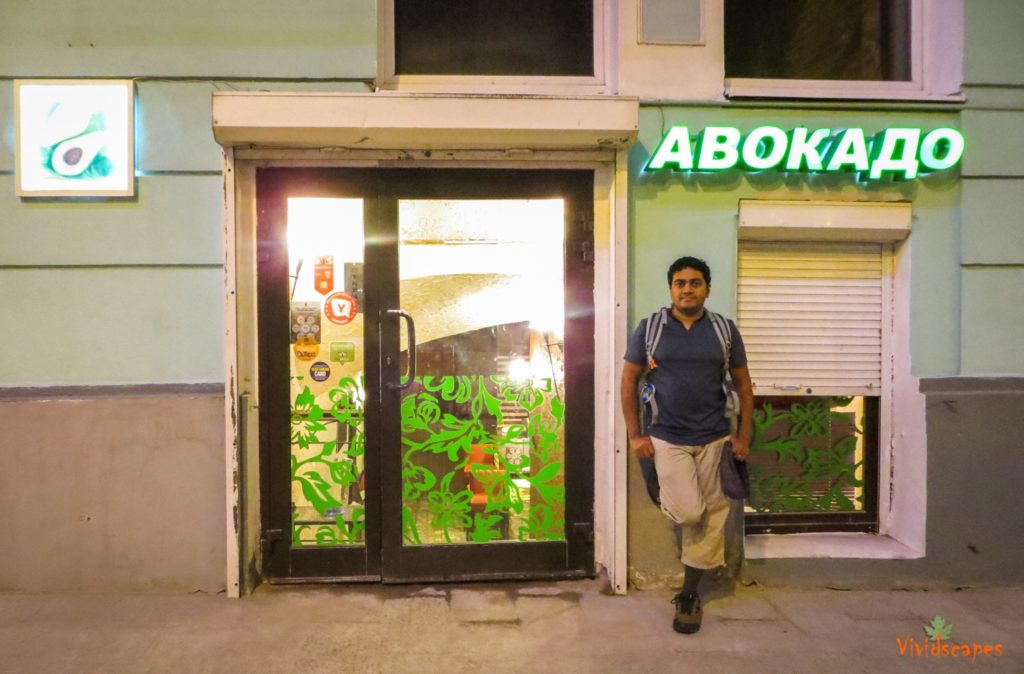 Avocado cafe is more cosmopolitan than Jagannath and has good varied veg and vegan options in its menu based eatery in a side street, a few minutes walk from the Kremlin and Red square, staff speak good english and food was very tasty and filling. 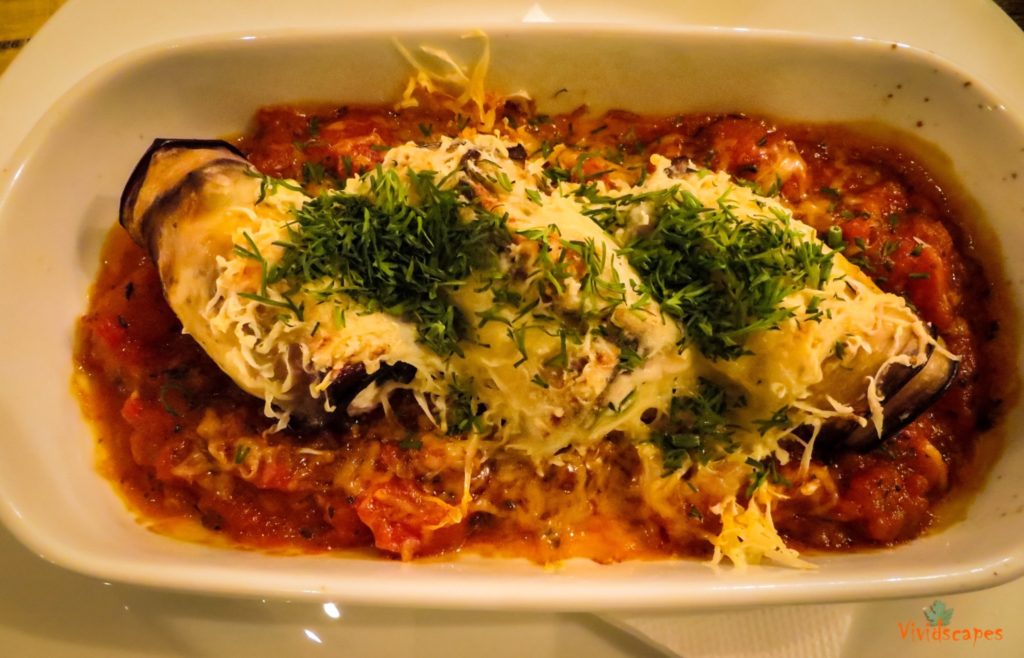 Are you planning the Trans-Siberian adventure?  make sure you plan a few days in Moscow to enjoy the ever changing beauty of this beautiful metropolis.

We arrived in Moscow on the Paris-Moscow express and embark on our Trans-Siberian adventure, Moscow has an international airport and well connected by rail and air.

Moscow metro is vast and is the best way of seeing the city, bike tours are also available.

May to September: Summers are hot and humid, and winters are freezing cold, best enjoyed in summer.

Travel and food is cheap and Moscow has a nice selection of hotels to suit all budgets.

A wide selection of tours are available via RealRussia Tours and bike tours from Moscow Bike tours.