Iceland – The land of Ice and Fire

Iceland has always been on my favorite place list for some time, and combine that to see the Northern Lights aka Aurora Borealis, what better way would it be to explore this fantastic country.

We booked our stay and car rentals through Nordicvisitor, if you are lost and not sure how and what to do in Iceland, I would very much recommend these guys at Nordicvisitor, everything was perfectly planned and all maps and details printed, can’t be any more perfect in planning, a double thumbs up.

Us and a Ford Kuga and some photographic gear and we set out sail to this fantasy land. Before I bore you with loads of text and pictures, here are some Geo-coordinates that might be useful if you are of the adventurous self-drive kind. 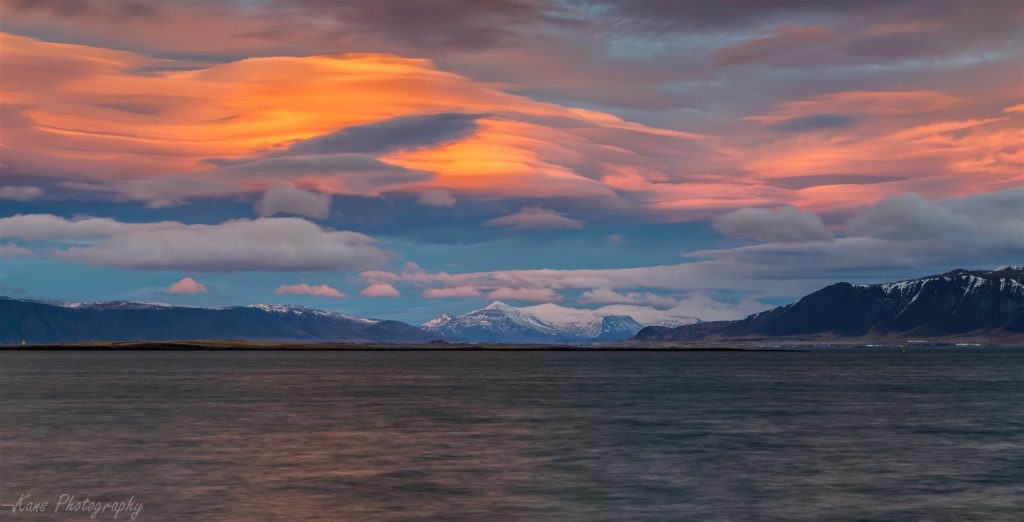 Fantastic views from the shores of Reykjavik

Here is a short video that we managed to create to keep you interested in reading further.

Geo-coordinates of major attractions in and around North Iceland.

We arrived at the capital’s Keflavik airport, a nice little airport that’s an hour away from the city centre, getting to the city was just a breeze, look for the flybus counter on the right as you come out of the baggage claim area and just before the glass doors that lead you to the Icelandic fresh air. Get the flybus plus tickets that gets you direct to the Hotel, a single journey costs 2500 NOK per head (Dec 2012) and look out for one the buses like below. 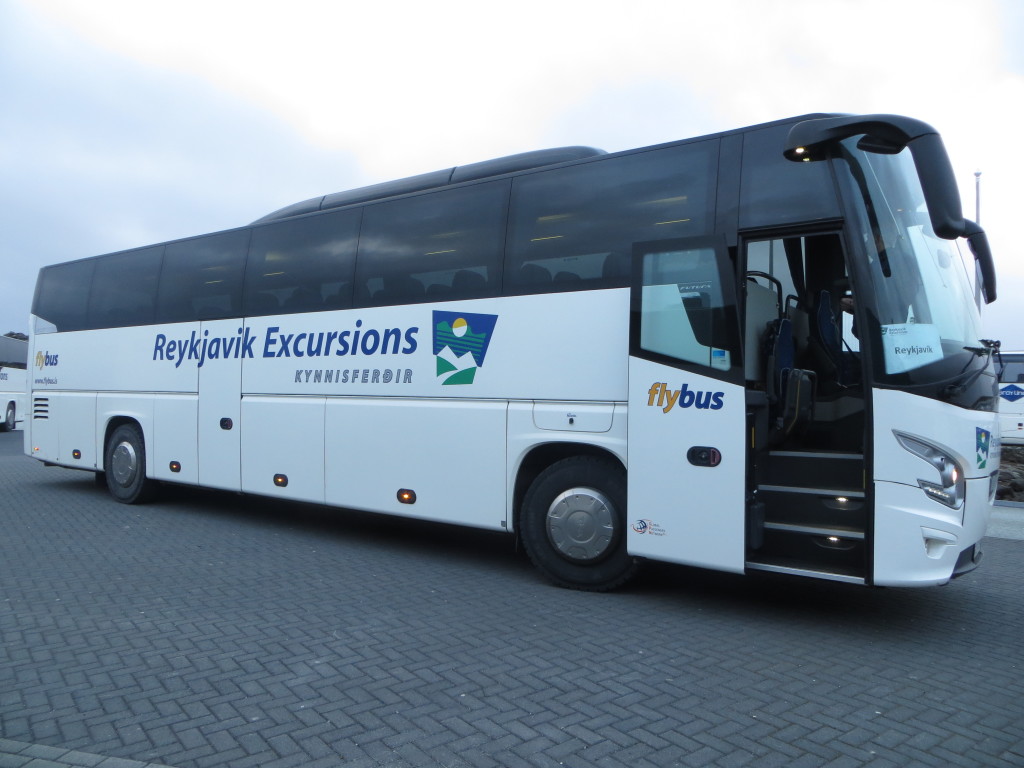 Had a fantastic day in Reykjavik, the capital of Iceland and a small and vibrant city, Iceland, not as Icy as the name might suggest but was a moderate 7 degrees, but the wind made it feel more colder than 7, it was more like -1.

The city is all lit up for the Xmas season with lighted Santa figures and Xmas trees abound.

We flew out of Reykjavik in the early hours in a small prop jet to the north, Akureyri, we picked up our rental car here. Only Garmin provides with a navigator that has Iceland maps and can be rented with the car rental agencies. 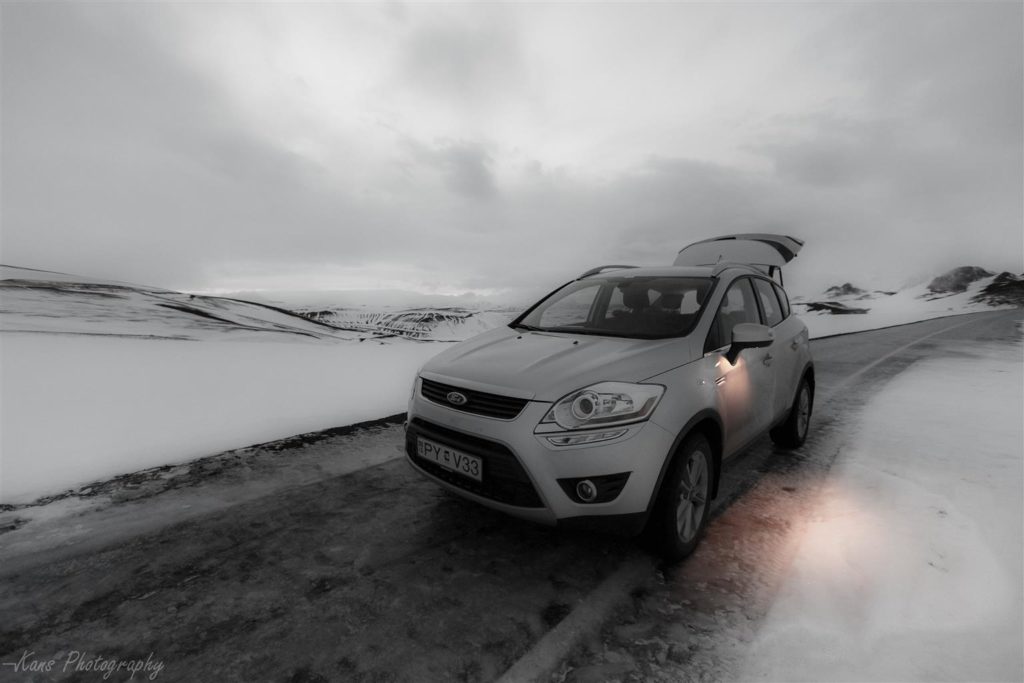 Ford Kuga, our friend for the 6 days in Iceland

We drove to Myvatn, our stop for the next 2 days where the search for the Northern Lights begin. Myvatn is a small town 100Kms east of Akureyri, we stayed in our cute little self catering cottage in Vogar farm, on the way we stocked up on Yogurt, Milk and other basic items for the next 2 day stay. 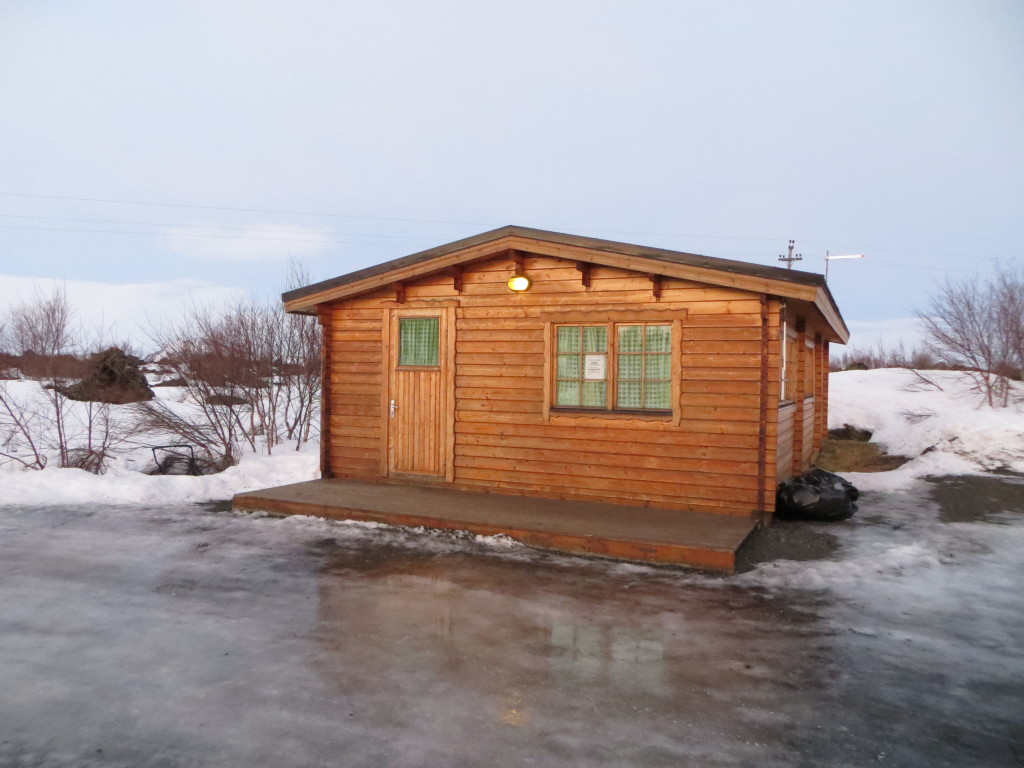 Vogafjos cottage where we stayed

There are a lot of interesting places around Myvatn, the unusual lava formations of Dimmuborgir and the Icelandic Yule Lads in Dimmuborgir, they are visible only during the 2 weeks before Xmas. 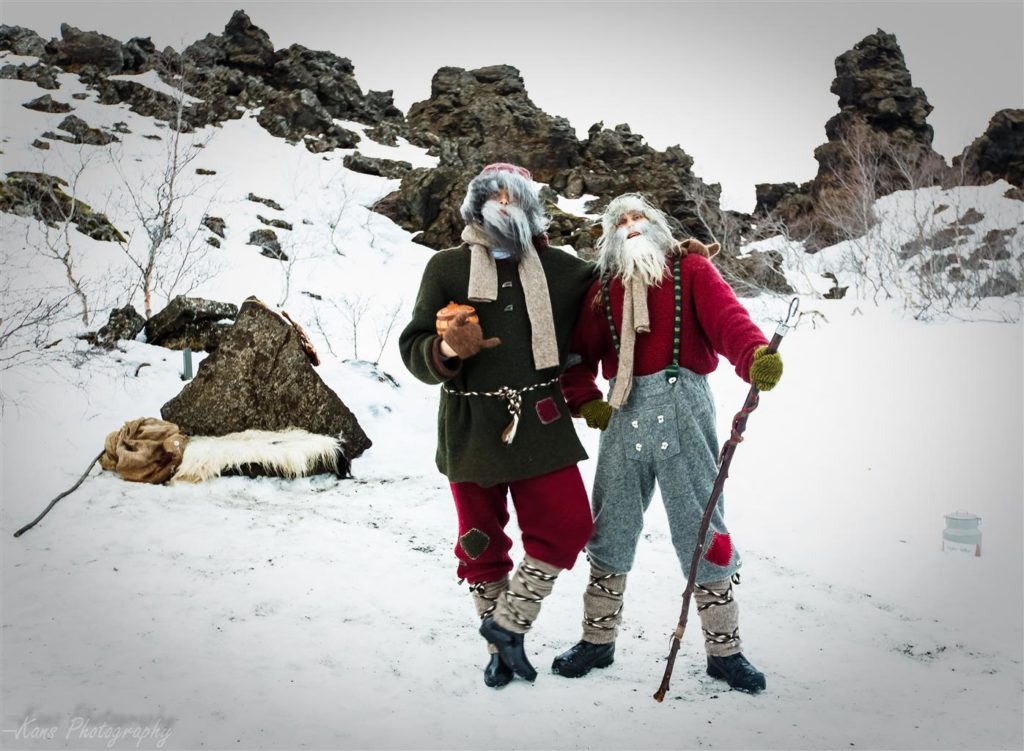 Fuming mud pots of Namafjall Hverir, a bit geology and details for the inquisitive ones. 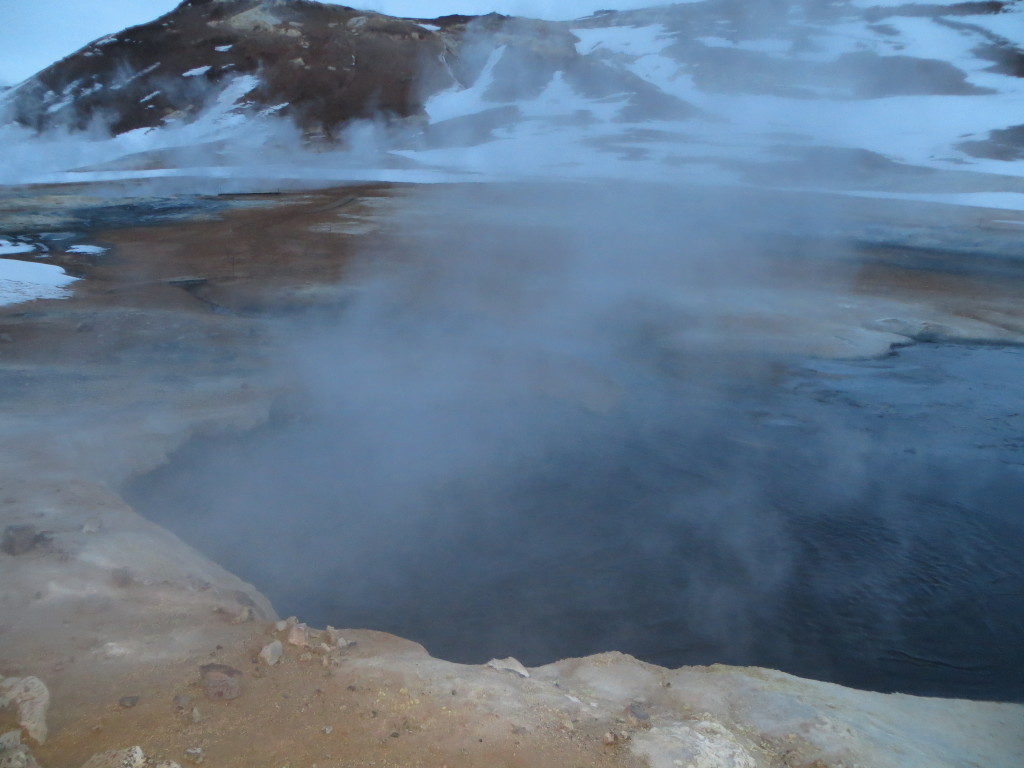 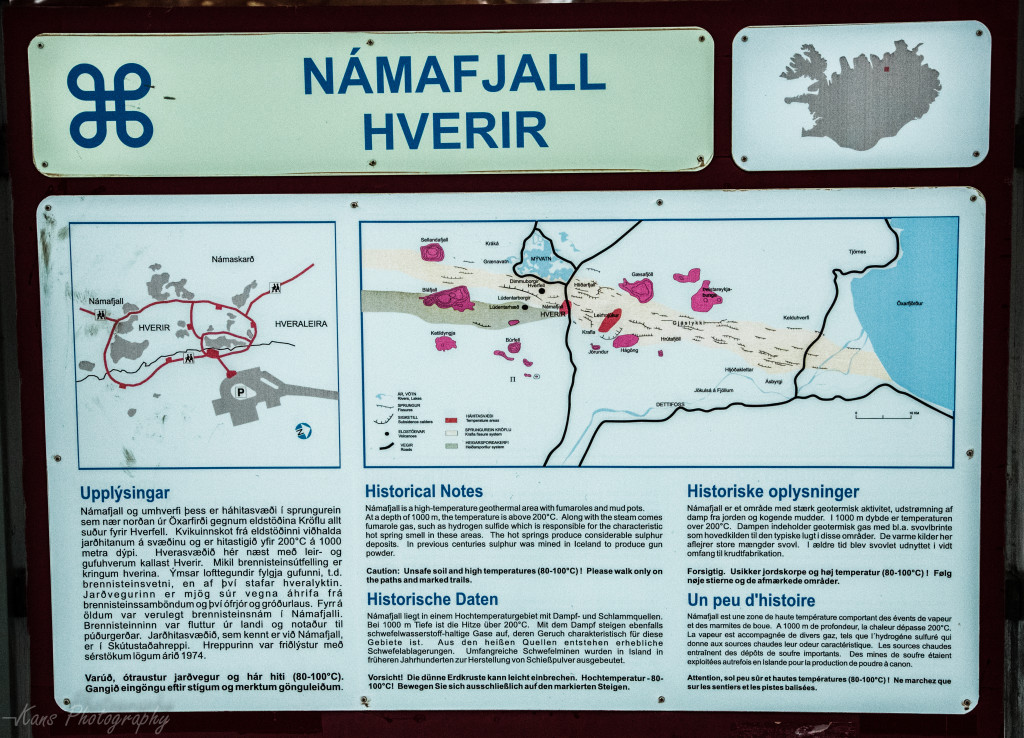 Details about the mud pots 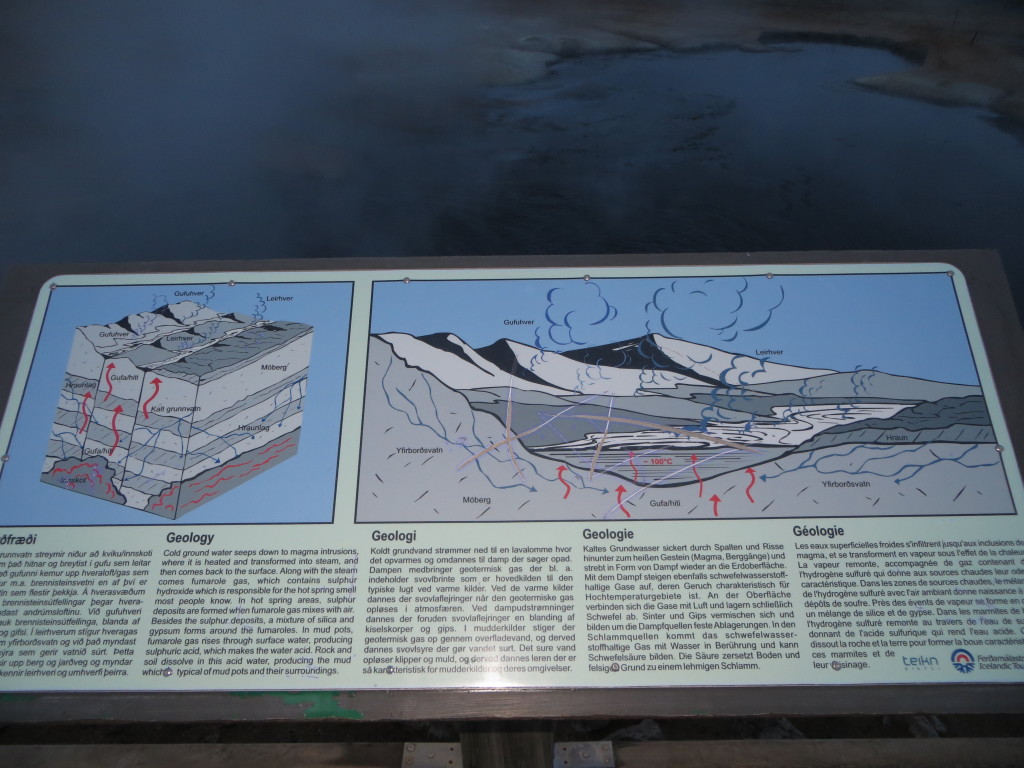 Geology of how they are formed

As Iceland is on Mid-Atlantic Ridge that owes its very existence to the molten rock, or magma. Over one-third of Iceland’s 40,000 square miles is volcanically active and loaded with lava fields. Elsewhere, magma too far below the surface to create volcanoes heats the rock above, sending the heated groundwater percolating to the surface in the form of “hot springs.” Iceland is far enough north so that it should be entirely covered by ice and snow, like Greenland to the west. The heat generated by the ridge, however, keeps the country in a constant state of thaw, distinguishing it as the Land of Fire and Ice. This makes Iceland best suited for Ge0-Thermal plants as there is an abundance of natural hot water from the hot springs. 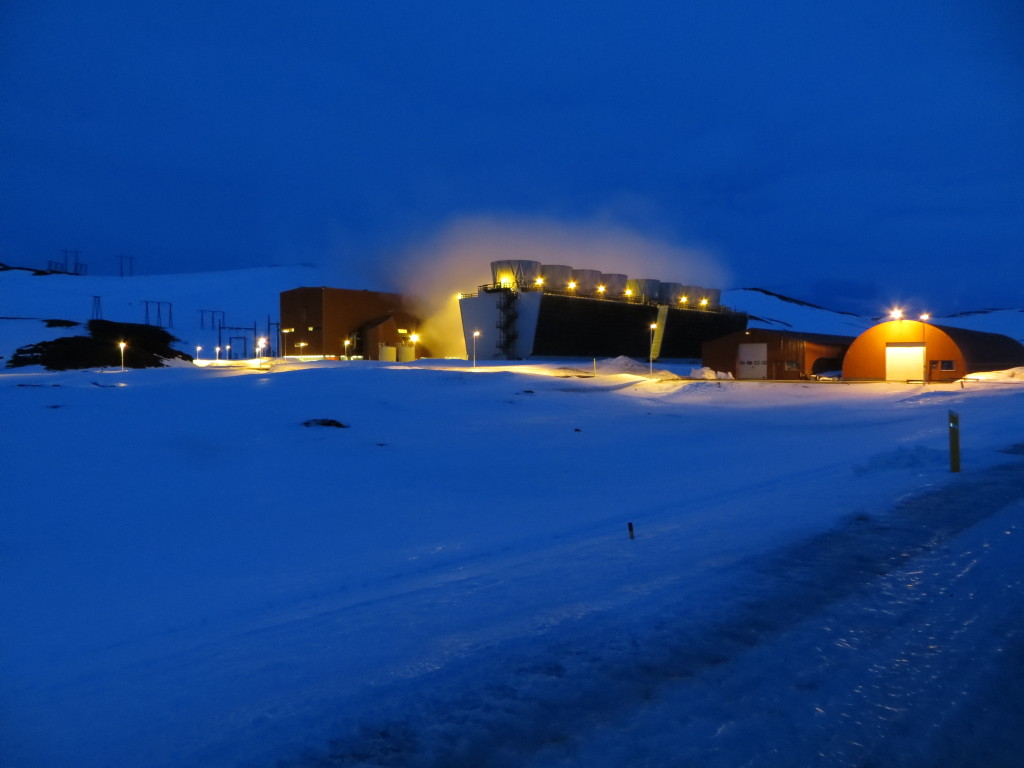 Hot water used in these stations are then diverted for use to local homes for hot water and heating, as the water rises through volcanic ash and rocks, it has a sulfurous smell to it, we were assured its safe to use for normal use and after a day in and around the area constantly fed the sulfurous fumes, we almost became immune to the smell.

Mt Hverfjall, to the east of Mývatn is a gigantic tephra crater about 140 m deep and 1,300 m diameter, a so-called Tuff Ring, created 2,500 years ago. Tephra has been carried from Hverfjall, all over the Lake Myvatn area. A landslide apparently occurred in the south part of the crater during the eruption, which accounts for the disruption of the round shape of the mountain.

The rim of the crater is only accessible by two trails, from the northwest and south. It is strictly forbidden to use other routes up or down.

As it was Christmas day, there were no flights back to the capital, so as the adventurous side of me alert, i planned the trip such i would drive back to the capital and return the car there instead of in Akureyri, it was heavy snow the day before and it was still snowing when we started, i knew its going to be a difficult drive back in such treacherous conditions, but nevertheless we were treated to driving in zero visibility in snow blizzard and icy stretches, but it was part of the fun in exploring.

We visited Godafoss on our way to Myvatn, but the light was not that great, so decided to stop again and get some more clicks, this time it was a treat with the setting sun and was able to get some decent captures in the bone chilling icy cold wind. 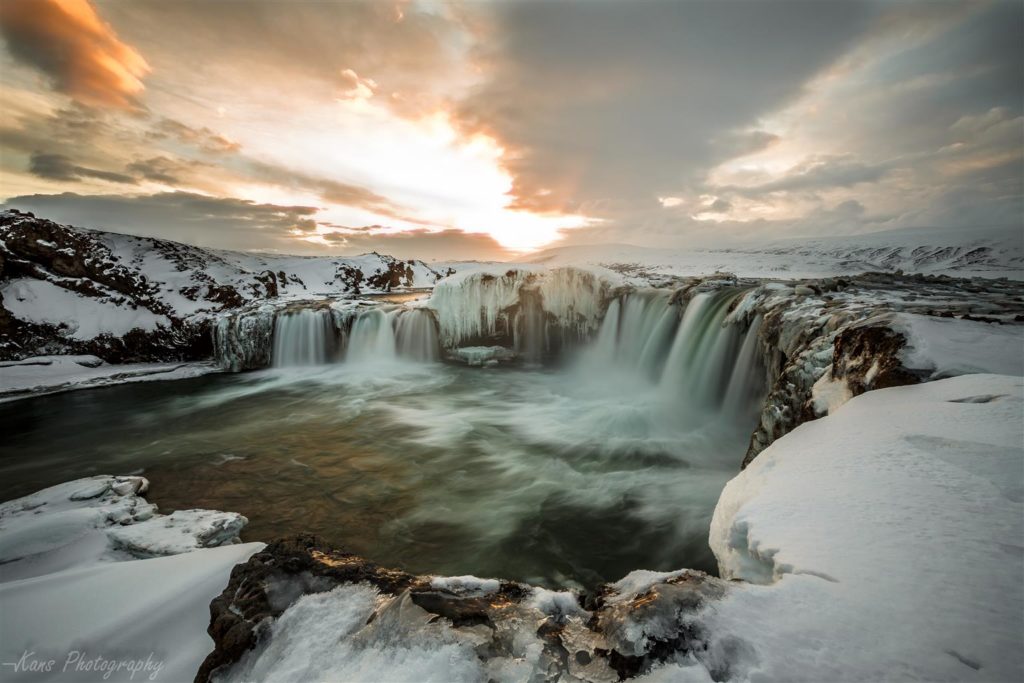 Godafoss – Waterfall of the Gods

We safely arrived at the capital and on the way we did visit the Deildartunguhver Thermal spring, the largest hot water spring that spews out boiling water. 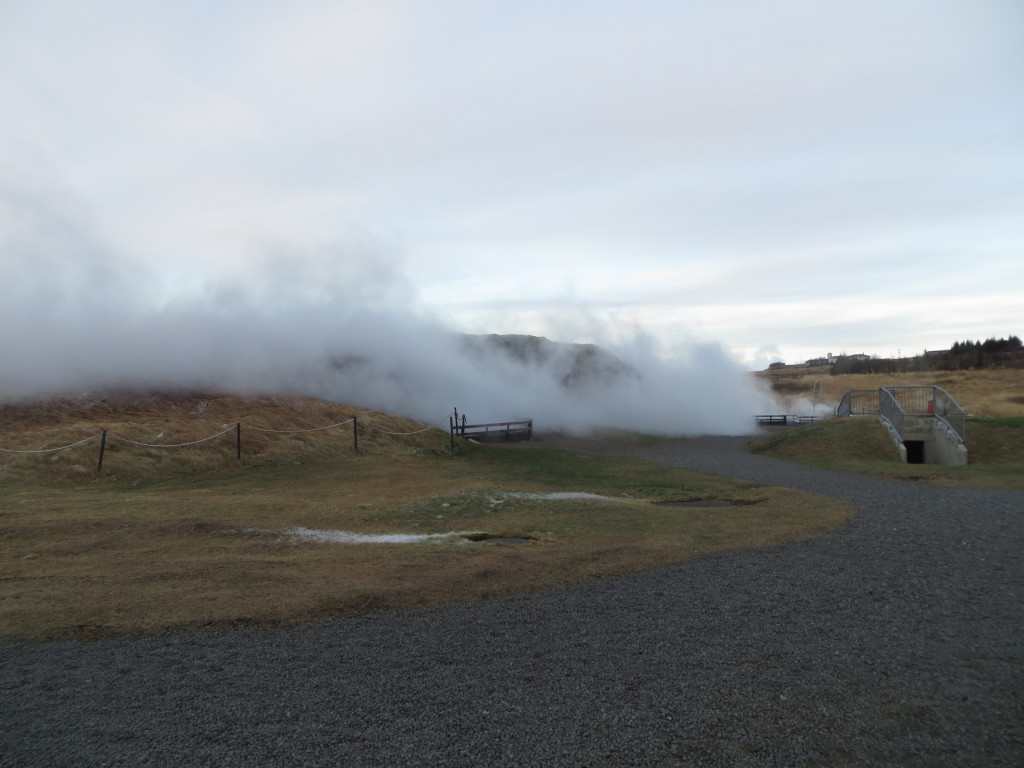 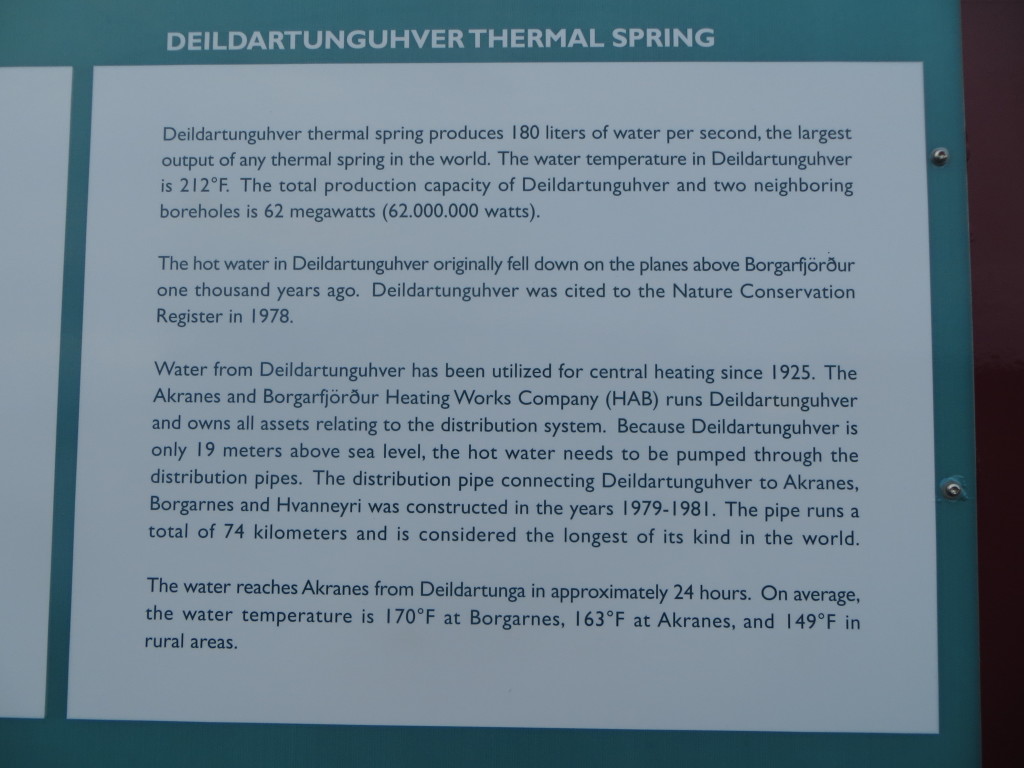 The last day was spent back in the capital Reykjavik and a trip to the best Nature bath – The Blue Lagoon is a must if you visit Iceland, the water comes from the nearby volcanic crusts and is at a warm 30 to 50 Degrees C and its natural volcanic salts make it a very good for skin. 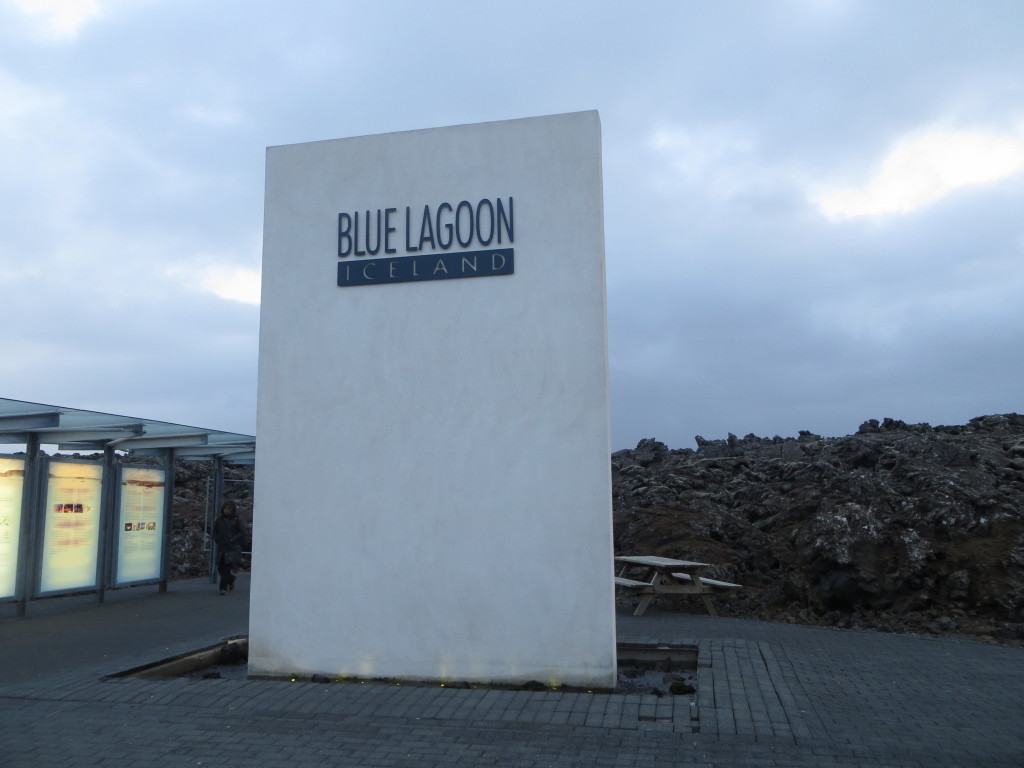 In all this trip was planned as a Northern lights trip and we did everything except the northern lights, the weather was snowing and cloudy and the sun activity was pretty low too, so the quest for the Northern Lights still continues…..

Also Read:
Drive To the Highest Point in Austria