Preikestolen also famously known as the Pulpit Rock is a famous trekking destination and a natural attraction in Western Norway an hour from Stavanger.

It’s a massive cliff with an unusual formation where the top of the cliff is flat measuring 85 x 85 feet, the cliff is 604 meters above the Lysefjord and the views from the cliff are spectacular. 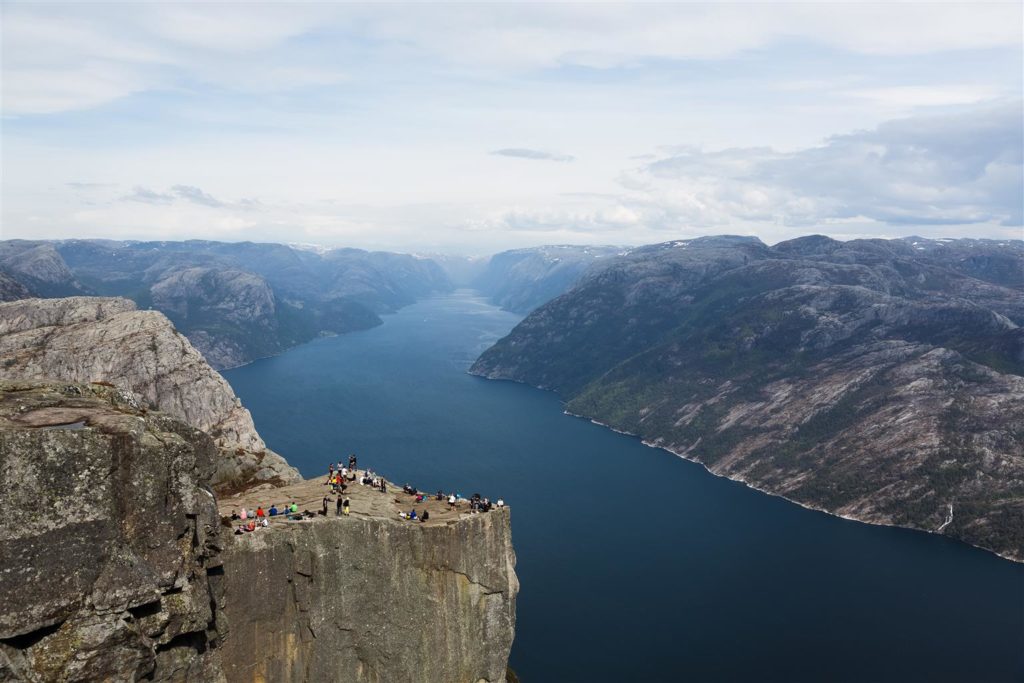 Reaching the cliff peak takes around 4 to 5 hours and you need to be reasonably fit as the climb is steeper in many places along the route and lots of rocky boulders to climb and ridges to cross along the way. 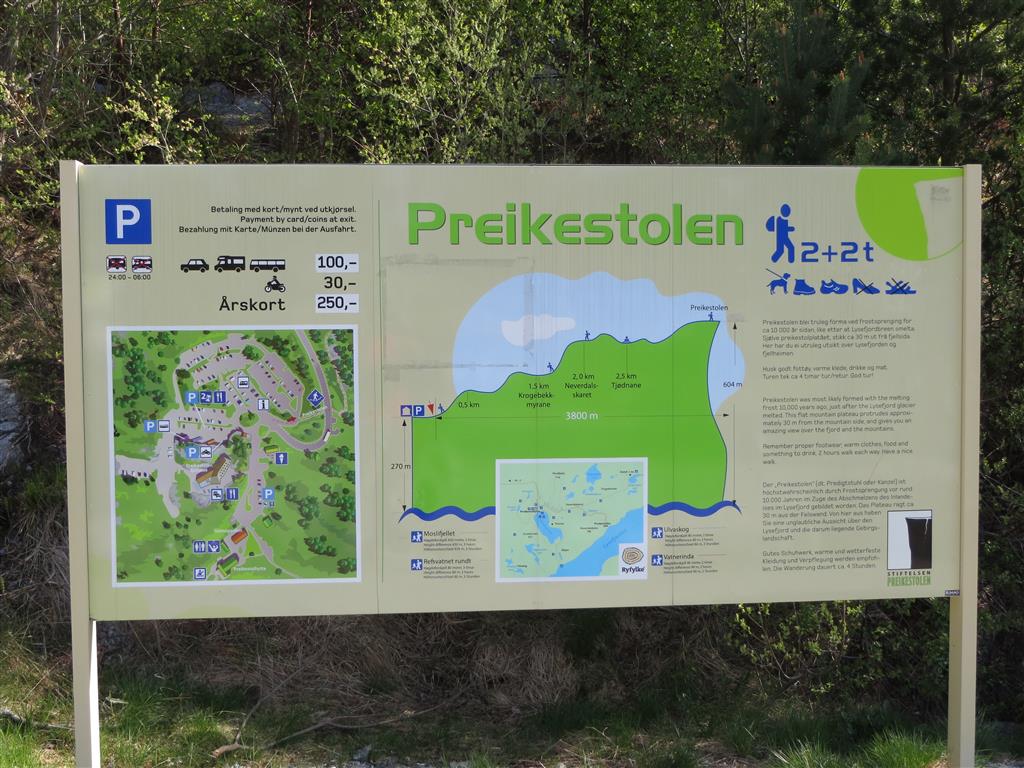 Make sure you have a good pair of trekking shoes, trekking poles will be helpful if you have one, water, food (there are no shops at the cliff top) and lots of enthusiasm and when you reach the top, there is nothing that matches the beauty of nature’s painting that beholds your eye, beautiful view of the Lysefjord with blue-green waters and the feeling of standing on top, its just gorgeous. 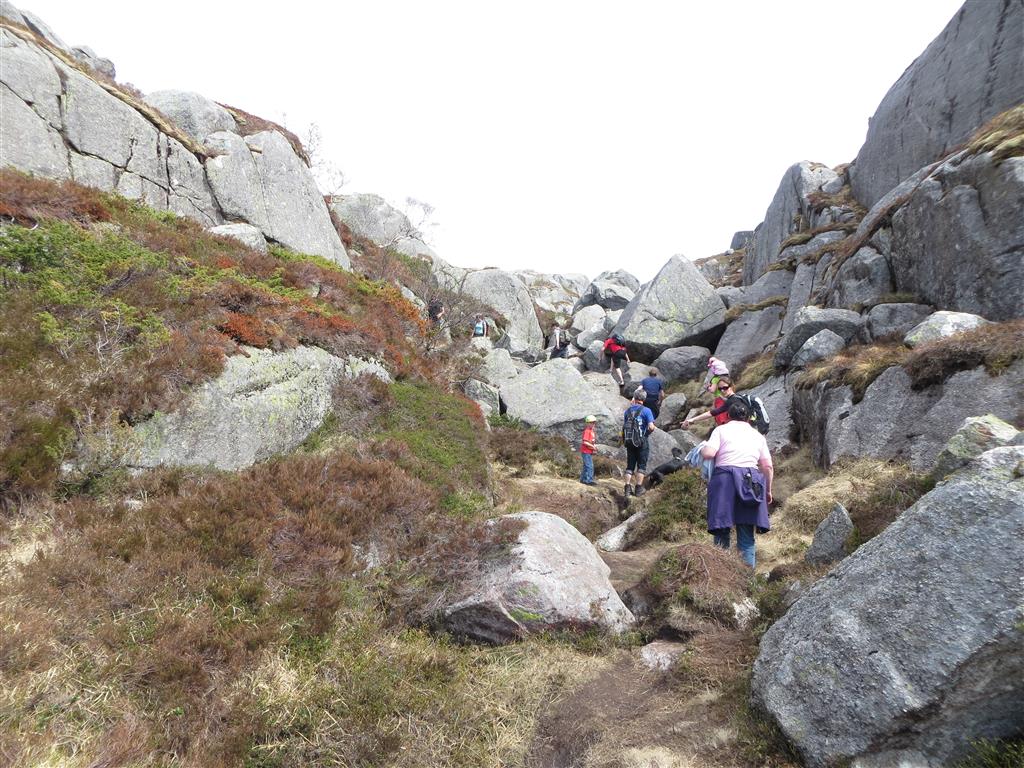 Path leading to the peak 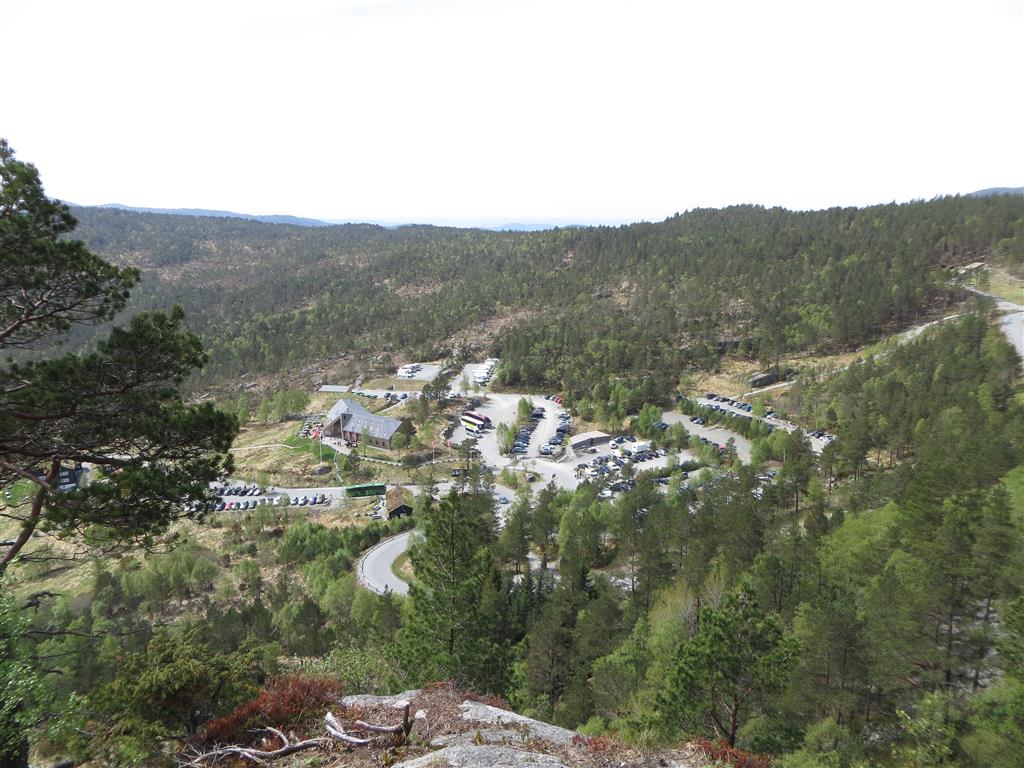 Also Read:
A Birds eye view of the Atlantic road

Trek Note: There are 2 paths that take you 2 the cliff, they separate approx 2/3rds of the way as seen in the track map above, the right hand side path takes you via the hilly area and its tougher than the left side Cliff walk, you might have to climb large rocks and navigate narrow crevices, but takes you to a higher point from where you can have a good view of the Pulpit rock itself. The cliff path leads direct to the pulpit rock. 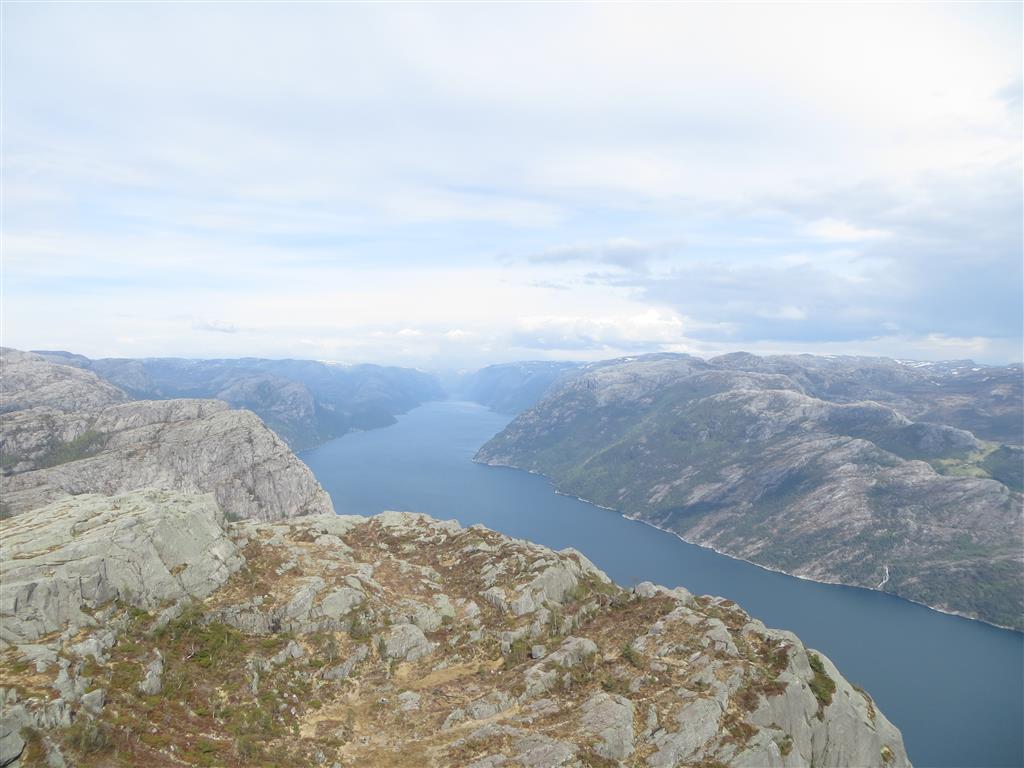 How to reach Preikestolen (Hiking)

The Pulpit Rock is in Ryfylke in Western Norway, the nearest ferry terminal is Tau and the nearest airport is Stavanger, the fourth largest city in Norway, 25 kilometers from Pulpit rock.
There is a flybus from the airport every 15 minutes that gets you direct from the airport to the ferry terminal.
During summer time (Mid May to Mid September) there are regular ferries (3 every hour) from Stavanger to Tau and you can get a local bus from Tau terminal to the base of the Pulpit rock hiking trail.
The road to the site ends at a parking facility at Preikestolen Fjellstue. There is a well-marked trail that extends from the parking facility to the site, which goes through a variety of mountain landscapes.

Alternate view from the fjord below

An alternative to view the pulpit rock from the fjord is available year round: a ferry trip sails beneath the Pulpit rock through the Lysefjord. The weather other than in the summer can be wet and cold, and clouds can then prevent seeing the rock. The ship stops at several small docks on the way in and out, including a layover at the end of the Lysefjord .

Attractions around the area

There are other marked hiking trails starting from the base as well and gives you good views of the Pulpit rock from the other side and a walking path around the Refsvatn lake.

The nearby mountain Kjerag (which reaches the height of 1,110 meters, near the bottom of the Lysefjord) is also a very popular hiking destination, and its famous for the boulder rock wedged between two rock faces.

Travel Note: It’s not very easy to reach Kjerag from Preikestolen other than by car, it’s a 3 hour drive around the fjords, there is only one or 2 ferries a day from Stavanger/Forsand, so if you plan to do the Kjerag hike, make sure you have a car and it’s a tougher hike than the pulpit.

Also Read:
Packing and Preparing for the Inca Trail

If you want to stay at the base after a hard days hike and can’t be bothered going back to Stavanger, then the only option is the Preikestolen Mountain Lodge.
We stayed at the Preikestolen Mountain Lodge (www.preikestolenfjellstue.no), which is situated at the beginning of the hike idyllically in the Ryfylke moorlands, overlooking the Refsvatn lake. The lodge is built to hotel standards and the new block was built in 2009.